Between real and imaginary travel

“Season” draws inspiration from a lot of sources. I’d like to talk about a twin axis of influence; some experiences traveling in Taiwan, and the cinema of that same country. The question I want to pose, and also avoid answering, is this: to what extent can we learn about other places and people through their art? If we read War and Peace, do we have a modicum of feeling for early 19th century Russia? Think of the qualifiers we’d have to add to this; well, Tolstoy was writing about Counts and Princes, not so much the peasants and serfs that made up the majority of the population. Tolstoy was writing about the generation of his parents and grandparents; he wasn’t alive at the time the novel takes place. The magic of narrative art may be in empathizing and becoming entangled in fictional lives set 215 years ago. It feels as though that time and distance have collapsed. Without going so far as to imagine these grant us any certainty or authority, I feel sure a parcel we can take with us is an affinity for the time and place, that when we imagine a scene set in a particular time, we project into it, into particular lives and details that make it real to us. Imagine you see a newspaper headline that says tensions are flaring up between your country and another. If that other country is a place you’ve been, you might picture the faces of people you met and knew. What if you’ve read their books or seen their films? For myself, the appearance of Iran in American news media feels different having seen movies by Abbas Kiarostami and Mohsen Makhmalbaf.¹


Another place that I knew from films is Taiwan. I first saw Yi-Yi by Edward Yang and became interested in Taiwanese New Wave² cinema. The style and content of these films are very beautiful and original. They’ve been on my mind while working on “Season” because of the way they locate an individual life, and the life of a family, within their environment and the larger historical context³. The style oftentimes eschewed traditional coverage and covered entire scenes in a master wide shot. This gives you a feeling of spending time in the place itself with the characters. Intimate but historical⁴, emotional but distant. 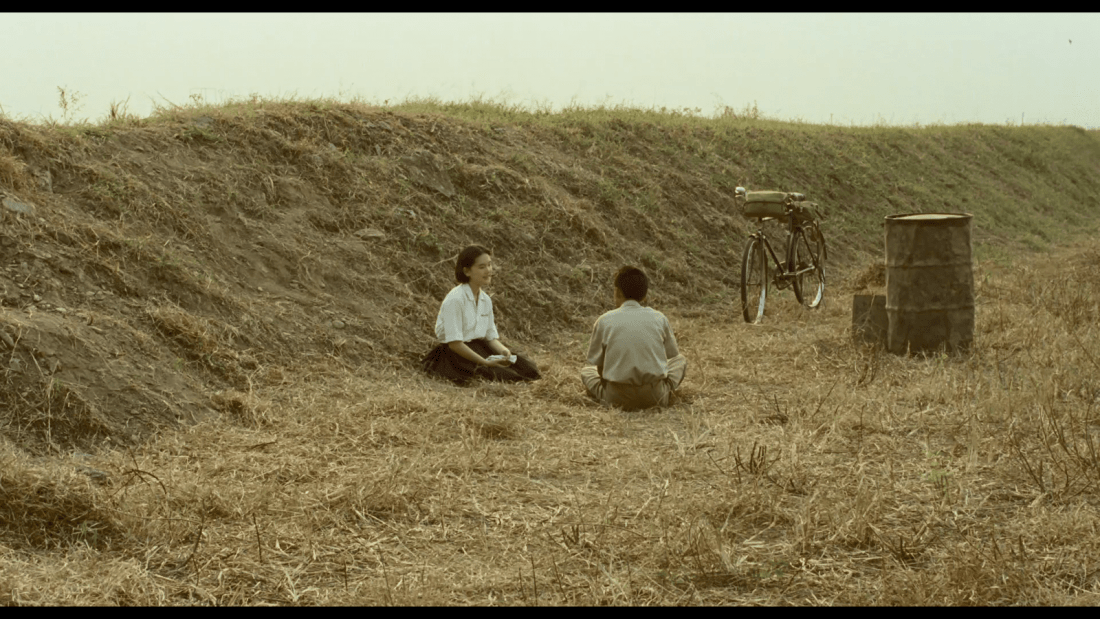 A moment in A Brighter Summer Day – two highschool students talk in a field while a military exercise is conducted in the distance. This combination of nostalgia and tenderness, with an ominous feeling tied to a historical moment⁵, is something we’re trying to create in “Season.”

When I had the opportunity to travel to Asia four years ago, I wanted to go to Taiwan, a place I’d only seen in these films.

Here: A photo taken by someone just before they gave us a ride. The only POV shot of “I’m about to pick up these hitchhikers” that I have.

Hitchhiking in Taiwan is tied with Albania for being the easiest of anywhere I’ve done it. When hitchhiking, you may gently try to get the person giving you a ride to drop you off somewhere slightly out of their way, usually when you’re trying to avoid getting stuck in a bad spot. You’re already in their debt for the ride, so it can be a delicate ask. On the contrary, in Taiwan we realized that if the driver knew our final destination, they might drive us straight there regardless of how far out of the way it was. This made us feel guilty so we started to shield this information. We had multiple drivers who insisted on taking us to certain landmarks or to eat at a certain place.

Finding a couchsurfing host in a big city is always difficult. You may need to send up to 20 or 30 personalized requests before succeeding. Taipei was no different. The host we finally found was a young dentist/aspiring filmmaker. He said he accepted my request because I had the aforementioned Edward Yang as one of my favorite directors in my couchsurfing profile. We talked about movies and culture and he taught me a lot. We even went to see a Q&A with the excellent director Tsai Ming-liang. He took questions while sitting in front of a piano and would occasionally start playing and singing.

From the art of another culture, we can get a partially understood glimpse into something profound. And in traveling, we accumulate impressions and bits of information that we’re getting directly from the place. The feeling of incompleteness is part of what’s so enticing about going away from what we know. What I’ve learned from the two different ways of experiencing Taiwan is that interest, or an affinity, can be sparked by art and can open the door a little. There still remains the moment of passing through it. These kinds of encounters are at the heart of “Season.”

¹ Politicians are aware of this, in fact. A great artist may be like a prophet, not without honor – save in their own country. But after you die, they’ll start building statues of you.

² A “New Wave” of filmmaking often coincides with political and social reform, such as the brief Czech New Wave that was linked to the Prague Spring. It’s no coincidence that the Taiwanese New Wave emerged at the same time as the democratic reforms of the 1980s and 90s.

³ The first batch of films were groundbreaking in how they depicted modern life in Taiwan. After these autobiographical films like “Growing Up” and “A Summer At Grandpa’s”, they made films about their recent history which were even more acclaimed and controversial. “A City of Sadness” touched on taboo subjects like the February 28 incident, when thousands of protesters were killed by the government.

⁴ This is the historical background that the audience is given towards the beginning of A Brighter Summer Day
“Millions of mainland Chinese flew to Taiwan in 1949 with the Nationalist government after its defeat in the civil war by the Chinese Communists.
Their children were brought up in an uneasy atmosphere created by their parents uncertainty about the future.
Many formed street gangs to search for an identity and to strengthen their sense of security.”
The text is establishing the character’s emotional lives and environment within the historical moment, why things feel the way they feel.

⁵ Although the world and ‘history’ of Season is made up – what they called ‘lore.’